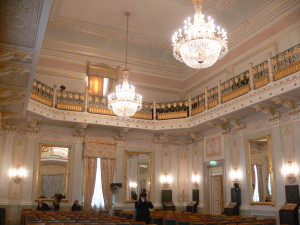 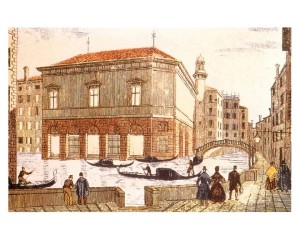 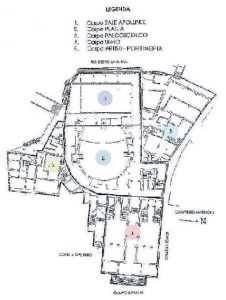 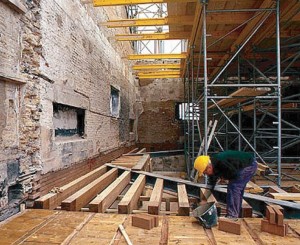 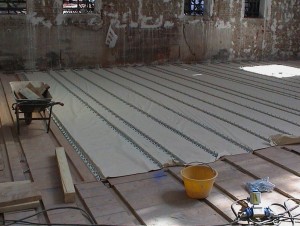 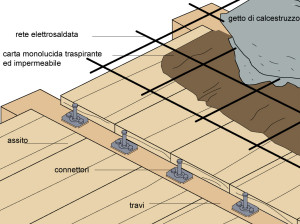 On 29 January 1996 a fire destroyed Gran Teatro La Fenice in Venice. Images of the burning theatre were seen around the world. A column of black smoke that impregnated the whole of the neighbourhood was  visible from the mainland. All that was left, were the blackened external walls of the theatre. Stalls, balconies, stage, vault were all destroyed: all that was left was a mountain of rubble.
Mr. Cacciari, the Mayor of Venice, immediately stated that “la Fenice” needed to be rebuilt “exactly as it used to be”, promising that the works would begin immediately, with a new opening programmed for the year 2000. After numerous difficulties, the project designed by Aldo Rossi was completed.

The reconstruction work restored the “Sale Apollinee”, the theatre hall, and the stage, to the exact appearance as they were before the fire, whilst introducing some significant changes in the north and south wings. New rooms were built for the preparation of the scenes, dressing rooms and labs (north wing), a fire tank, and the new 200 place Rossi rehearsal and concert room (south wing).

The Teatro La Fenice was built according to the project and reopened in December 2003. The task of the company in charge of the works was extremely difficult in terms of recreating the original elements of both the stage and the interiors, the result of an expert craftsmanship extremely difficult to find in modern times, and recreating the original colour hues. The organisation of the working site in such a logistically difficult city as Venice was also very demanding.

The theatre was originally built in 1792, following the desire of the “Noble Society”, made of the best names of the Venice nobility and bourgeoisie. That luxurious and lavishly decorated building was the last great work of the republic of Venice, which only five years later (1797), was given to Austria by Napoleon under the Campoformio treaty. The theatre soon became one of the most prestigious in Italy, together with the S. Carlo theatre in Naples and La Scala of Milan. The building was designed by Antonio Selva, a neo-Palladian artist. The theatre brings together two different styles, with its neoclassical façades and the baroque revival interiors, which have undergone partial changes during the course of history (for example, in 1808 part of the interiors of the theatre were changed, with the construction of the imperial balcony). In 1836 while under Austrian domination, there was the first great fire. Even it that occasion, the reconstruction works did not bring any significant changes to the original layout.

Description of the works undertaken on the wood floors of Sale Apollinee.

The desire to reproduce the original construction as faithfully as possible meant the need to use the same materials as were originally used for the construction of the Theatre. The floors, therefore, were rebuilt using solid larch wood beams, as per original. Where load-bearing requirements were less demanding, these floors were made with beams superimposed with crossed wood boarding, nailed to the beams themselves. The most demanding load bearing requirements were for the floors of Sale Apollinee, which since the origins of the theatre have always been used for parties and receptions. With such a concentration of people to be expected in these areas, the floors must be able to withstand accidental variable loads of at least 500 kg/m2. in accordance with current regulations. The solution of using a composite wood-concrete floor connected by floor connectors made it possible to achieve the required increases in terms of rigidity and load bearing capacity. The floors were built using solid 17 x 25 cm section larch wood (class S10) beams having undergone pesticide and woodworm treatment, placed at 50 cm spacing, covered by continuous 2.5 cm boarding, Tecnaria CTLBASE wood floor connectors and an additional 8 cm thick cast concrete slab.

Once the beams had been placed in position, the superimposed boarding was cut away above the supporting beams to expose the upper side. In order to prevent the wood from absorbing the water from the cast concrete, a sheet of paper specially treated on one side was laid. Two 5 mm diam, 10 mm deep holes were drilled in the beams for each wood floor connector to house the two screws supplied with the same. The screws were then tightened with a heavy duty drill. Due to the high number of connectors required, a special tool designed by Tecnaria was used, which made it possible to quickly drill two holes at the time. The floor was then reinforced with an electrowelded mesh. Props were used as supports under the floor before casting the concrete slab. Lastly, a 8 cm thick concrete slab was cast in place (Rck 250). The props were kept in place until the concrete slab had completely set. The works did not require specialist operators. Read also